This concept was first applied to bourbon in 2007 with the release of Woodford Reserve’s Master’s Collection Sonoma-Cutrer Chardonnay Finish. Since then, it’s become a very common way for distilleries to release new products with different flavor profiles in much shorter periods of time than traditional aging.

The idea is, a bourbon is ‘finished’ by transferring it from its original barrel into a second, different barrel. The second barrel might be a used wine barrel or a specially treated new barrel. Usually a ‘bourbon finished’ isn’t a true bourbon because if the second barrel is previously used, it can’t be used for bourbon.

Now, I first thought (impulsively) that Jim Beam Double Oak is a true bourbon – look at the marketing: 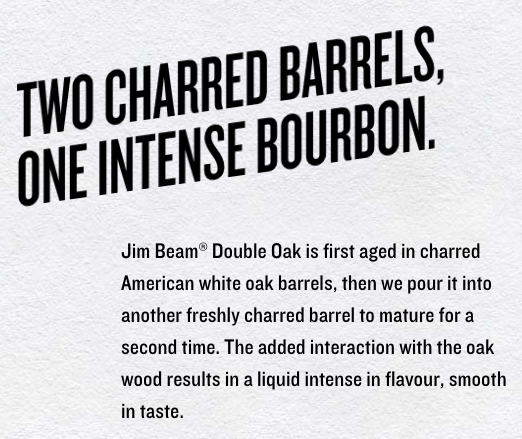 Ah, how even I can be fooled by clever marketing!

My sampling companion doubted both barrels were new … owing primarily to the expense that would entail. So I took a closer look at the bottle: 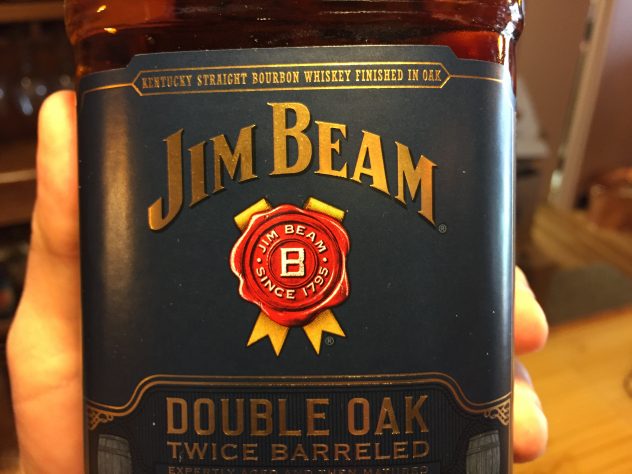 See that very specific small text at the top that reads “Kentucky Straight Bourbon Whiskey Finished in Oak”? That’s code for ‘it was bourbon … then it got put into a used oak barrel.’

So … it starts as Jim Beam bourbon then gets put into a second, used but ‘freshly charred’ barrel. Now, JB isn’t elaborating on what kind of barrel they’re using but Occam’s Razor would lead us to believe it’s just another used JB barrel.

Maybe ‘just’ is a little bit harsh. Re-charring a barrel actually creates the potential for a whole new round of use and flavor extraction – it’s pretty common for Scotch whiskys, actually.

Those flavors from charring tend to be mostly smoke with underlying caramel and vanilla, primarily. But those sweet notes are dramatically reduced in a second-use barrel, leaving smoke and oak as the dominant notes available.

With that expectation, how does Jim Beam Double Oak taste?

Nose: Compared to Jim Beam’s flagship white label, the nose is much more intense. Some of that owes to the higher proof point (86 vs 80), but most of that I think is coming from the second barrel. It’s heavy with oak, smoke, char and sawdust. All of the standard bourbon notes are there – caramel, vanilla, a little graininess – but the smoke dominates.

Palate: Exactly the same as the nose. No surprises here. The smoke note overrides all the others and actually produces a harsh character reminiscent of a younger bourbon.

Finish: More smoke and oak, a little sweet and a fair bit of heat.

Verdict: If you like your bourbons smoky, intense and on the hot side, you’ll probably enjoy this one. It’s like a traditional bourbon but skewed in that direction. Would probably make a fantastic manhattan. It’s one I enjoyed trying but won’t find a spot on my home bar.