A stand-alone in the ‘bourbons finished’ category, Maker’s 46 stands out because it’s not made quite the same way as the others.

Traditionally, finishing a bourbon (or any spirit, for that matter) involves transferring the liquid from one barrel into a second, used barrel. That imparts the flavors left as residue in the barrel from the wine or sherry or bourbon or whatever into the finished spirit. Instead of that process, Maker’s 46 finishes the bourbon in the same barrel it started in. At the tail end of maturation, the barrel is dumped, the bourbon is reserved, 10 seared French oak “staves” are inserted into the barrel’s cavity, then the bourbon goes back and gets a second round of maturation.

The idea here is that the best way to extract the flavor of wood is to completely submerge the wood in the liquid to maximum surface area coverage. That’s good science! And this isn’t a new technique – in wine, it’s called ‘chipping.’ But that’s not good marketing … so MM re-named the ‘chips’ to ‘staves’ to make it sound more barrel-y.

Technically, though, chipping means it’s not a true bourbon: 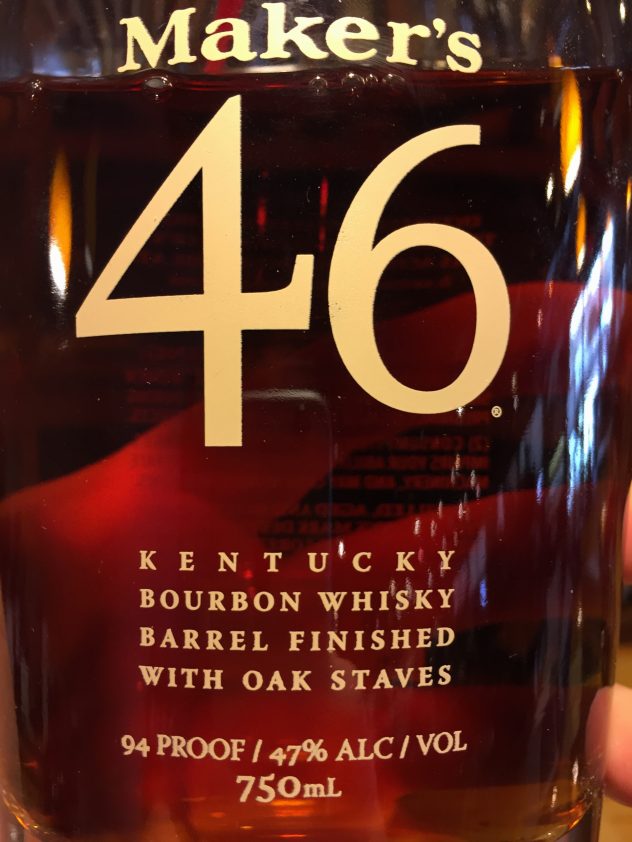 “Barrel finished with oak staves” … but that’s a really picky technicality. I mean, come on, it’s just more wood. They could have gotten the same effect with micro barrels made from the same seared French oak and it would have been authentically bourbon, so I think cutting them a little slack is in order.

But what does that additional wood do to the flavor profile? Quite a lot actually ~

Nose: Much hotter than standard Maker’s Mark (but that’s a really low bar because regular MM’s nose is quite soft) with strong wood, oak and vanilla notes.

Palate: Warm moving over to hot with the expected Maker’s Mark notes of caramel, vanilla, oak, tobacco and green apple. There’s a new spiciness, especially white pepper, plus some clove and cinnamon that’s less noticeable in the original.

Finish: Dry and hot. The dryness is the most striking thing – it’s entirely unlike Maker’s Mark in that respect. The finish lingers nicely but non-bourbon drinkers will probably find it too hot.

Verdict: It’s a great next step for confirmed Maker’s Mark drinkers because it has everything they’ll expect plus spiciness with the intensity turned up. It’s probably not a go-to for a lot of folks due to the hot and dry finish but it’s a nice sipping bourbon especially with a cube or two.